Despite rising recognition, Pokkali farmers seek help
Pokkali rice from central Kerala, a grain variety that has a geographical indication (GI) tag in 2007, has now become a part of India’s postal stamps. 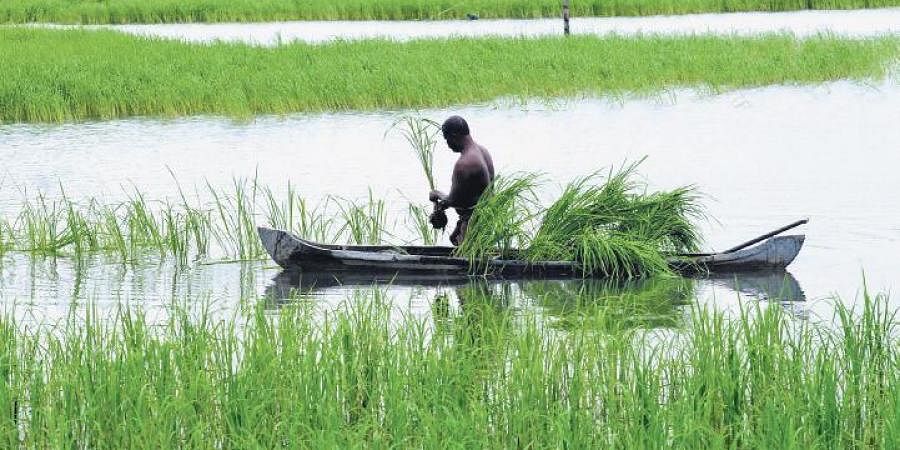 Express News Service
KOCHI: Pokkali rice from central Kerala, a grain variety that has a geographical indication (GI) tag in 2007, has now become a part of India’s postal stamps. In an event organised by Kadamakudy Nellulpathaka Padasekhara Samithi in Kochi, the stamp was released to the public in the presence of Vypeen MLA K N Unnikrishnan, District Collector Jafar Malik and Post Master General of Central Kochi Mariamma Thomas.  The move will help popularise pokkali, a unique rice variety that can grow in saline waters, said K A Thomas, secretary of Kadamakudy Nellulpathaka Padasekhara Samithi. He said the organisation will submit a memorandum to the MLA and the collector detailing the struggles and demands of paddy farmers.  “Pokkali rice is grown without any fertilisers or pesticides — be it organic or chemical. That is what makes pokkali rice unique and highly nutritious. But now, pokkali farmers are struggling to stay afloat. Moreover, the number of paddy fields and farmers producing pokkali has also come down drastically,” said Thomas. The base price set by Supplyco for the rice is Rs 28 per kg. “It is to be noted that many organic varieties are sold at over Rs 100 per kilo. It’s difficult for the farmers to survive when our crops are so underpriced,” Thomas said.   The reduction in the price of prawn varieties, which are farmed in waterlogged pokkali fields after harvest, has made things worse for these farmers. “In 1995, we used to earn nearly Rs 300 per one kilo white shrimps. Now, we get only around Rs 200 even for the highest quality prawns. Pokkali farmers used to depend on prawn farming to survive. But right now, neither of them is fetching us enough money. If we spend around Rs 45,000 for farming pokkali, we earn only around Rs 25,000,” he said. To survive, the organisation has demanded the government revise the base price to Rs 120 per kg. Demands Increase the base price of pokkali rice to I120 Help farmers with basic cultivation needs Help to remove silt from farms Adding pokkali to super-speciality rice category  A governemnt master plan to help the prawn and pokkali farmers
Author Name: https://www.newindianexpress.com/cities/kochi/2022/mar/31/despite-rising-recognition-pokkali-farmers-seek-help-2436056.html
Date: 31-Mar-2022